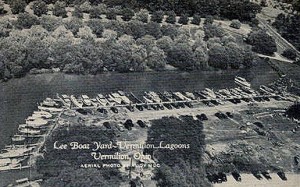 In 1956, a number of avid boaters purchased Lee’s Boat Yard from Leroy and Norma Lee.  At that time, Vermilion Power Boats Incorporated was established and the founding board of directors were elected by the stockholders. The first president, Arthur W. Miller, guided the board of directors to begin the process of creating a “top notch” facility on the shores of Lake Erie, serving VPB stockholders with their boating needs.

VPB Inc. is governed by an elected board of directors, whom maintain the fiscal and managerial roles of the corporation.  The board of directors manage the VPB staff to operate a “ship-shape” marina for stockholders, renters, and visitors.  Also working collaboratively with local businesses and organizations to promote our great city of Vermilion, Ohio and the many attractions in town.

Since the founding years, VPB has continued to provide summer dockage, winter storage, a premium fuel dock with a pump-out, and a full-service marine shop with engine and fiberglass repair.

Affiliated as a subsidiary of VPB Inc., is Vermilion Power Boats Yacht Club. Founded in 1983, VPBYC is an affiliate of the I.L.Y.A. (Inter-Lakes Yachting Association).  As the “social arm” of the corporation, VPBYC has an extensive social calendar including rendezvous’ and club functions. VPBYC also has social members that are non-stockholders in the corporation, but have an avid interest in boating.

South Shore Dredging hoisted an eight-thousand pound sandstone from VPB waters in 2012.  The sandstone possibly was lifted from the flood of 1913 from the foundation of the old inter-urban bridge that was over two hundred yards away. Based on the physical markings, the sandstone originated from the quarries of South Amherst. The power of water carried this particular sandstone upon VPB property where it quietly rested for one hundred years.

Nick Burnsworth, a true craftsman, chiseled “Vermilion Power Boats” and the company’s incorporated date, 1956. This beautiful sandstone is located on the right side when entering the gates of VPB for all to enjoy!